Whose Reality Are You Living In? 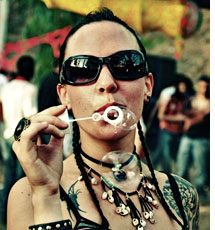 Note: This is a guest post by Vlad Dolezal of An Amazing Mind.

â€œEvery morning, I look in the mirror and say to myself: “This is your day. Don't let ANYONE take it from you!”
David Deida

Imagine two people take a ride in a balloon. One of them is terrified of heights. The other isn't. The one who isn't will enjoy the magnificent view, feel the warm wind on his face and simply love the ride. The person terrified of heights will probably squat on the floor, thinking “Omigod! Omigod! This thing is gonna crash and burn! We're all gonna die! Aaaaaaaaa!!!”

Objectively, they went through exactly the same experience. Yet one person had the time of their life, while the other would be better off having their chest hair depilated (and trust me, that HURTS). The difference was in their VIEW of the reality.

Your view of the world is crucially important for your well-being. Yet many people let others decide their reality for them. Be it friends, relatives, TV, or the newspaper. Who decides YOUR reality?

Reasons for choosing your own reality

I'm an optimist. And I mean I'm REALLY optimistic, right at the end of the spectrum. If I got hit by a car this afternoon and lost both legs, I'd think something like: “Yes! I finally get to find out what it's like to be disabled! Plus, when biographies are written about me years later, theyâ€™ll say ‘He managed to overcome life's challenges…'”.

Without further ado, here are three reasons to be optimistic:

Imagine you wanted to start a blog. And you were a pessimist. Your thoughts would be “It's not going to work anyway, nobody will read my blog, why even try.” And voila, you'd never even start a blog.

Being an optimist, on the other hand, I started my blog. I stuck with it for the two months when I had basically zero readership. Then, one day, I wrote a blog post that I felt was my best so far (Why Linux doesn't spread – The Curse of being free). So I submitted the post to several social news sites, it hit the Slashdot front page, and the rest is history.

As an optimist, you'll see beyond obstacles that others consider impossible to overcome. They will think you're crazy. But oh, they will be SO wrong. They laughed at the Wright brothers. They laughed at you. But you'll show them, you'll *show them all*! AAAhahahahaaaa…

Thomas A. Edison was interviewed by a newspaper after 800 unsuccessful tries to make a working light bulb.

“How does it feel to have failed 800 times?” the reporter asked.

“I haven't failed 800 times. I haven't failed once. What I have done, is I have succeeded in proving that those 800 ways won't work. Once I eliminate all the ways that won't work, I will find the one way that will.”

Several years later, after thousands more “successful proofs” he managed to find a way that works, and thus illuminated the world.

2. As an optimist, you'll have better relations with other people.

Positive, optimistic people are fun to be around. I'm sure you've experienced that yourself.

By becoming an optimist, you will become such a person. People will enjoy being around you. Also, by the law of attraction, you will attract more similar people into your life.

Imagine you have a crazy idea for how to spend your holiday. Would you like your friends to be like “Yeah man! Awesome! Go for it!”, or “Nonsense. That will never work. What the hell were you thinking? Come on, let's go grab a beer and complain about how miserable we are.”

This is the most commonly cited reason… and the most important one too. But I haven't put it first. Because if you say this reason to pessimists, they will say: “What the hell are you talking about?”

If you want to help others, you need to speak their language. That's why I put achievement and success as the first reason. That's a universal theme that everyone will understand.

How to become an optimist

Now you know the main reasons for being an optimist. So how do you go about it? Below are the best ways to become an optimist.

As you go through your day, tension builds up in your muscles. The tension needs to be released. Exercise releases that tension. It also releases endorphins, the body's natural opiates, into your bloodstream. This leaves you relaxed and happy for hours afterwards.

If you're not much into exercising, check out my 5 Simple ways to increase your happiness. In there I share a simple way to exercise that takes just 10-20 minutes and requires only a watch.

2. See the positive aspect of every situation.

I propose you try this. For seven days straight (starting tomorrow), see the positive side of every situation. Just like Edison and his “successful proofs”.

If you want to make sure you don't forget, I suggest a variaton of a method I got from Tim Ferriss. Wear a rubber band around your wrist. Every time you forget to think positively about a situation, simply switch the band to your other wrist. The proper way would be to take off the band only after you've gone for 7 days straight without switching wrists. But you can simply try it for 7 days.

In one experiment, the researches took 3 clinically depressed people. A psychologist then took over, making some changes in their daily routine to get them thinking positively (one of the changes was daily exercising). At the end of 30-day experiment, the subjects had been transformed into some of the happiest people you've ever seen.

One of the things the psychologist did was to have them place colored stickers around their house and workplace. Then, whenever they saw one, they had to think of something that made them feel happy. Try doing the same thing (possibly using something else instead of colored stickers).

This exercise will literally hardwire your brain to think happily and positively. By reinforcing the neural pathways of positive thought, you will make it easier to think positively in the future. You will achieve more and be happier.

4. Hang out with positive people.

When you spend time with people, their characteristics start to rub off on you. You might start using some of the same gestures, or think some of the same thoughts. You can't help it. It's a natural process to help us bond together. The good news is, you can use this to your advantage.

David Deangelo, from Double Your Dating, said he had been researching the topic of women and dating for two years without much success. Then he started to hang out with the “naturals” – guys who were naturally successful with women. That's when he really started to “get it”. Today, he is the most successful author of programs that help men improve their dating skills.

You can use the same effect. By spending time around positive, optimistic people, you will naturally become more like them. You might take on some of their gestures, or patterns of thought. Learning from real-life examples is the fastest way, so use it.

If you want to make friends with optimistic people, just go and talk to them. They're open to making new friends.

Vlad Dolezal writes a blog about psychology, self-improvement and Linux. For more fun, step-by-step ways to improve your life, subscribe to his RSS feed. Or check out this article for practical tips to immediately improve your body language. Really, do it.