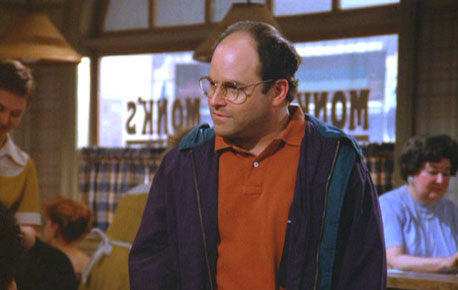 “I'm disturbed, I'm depressed, I'm inadequate, I've got it all!”

“If you take everything I've accomplished in my life and condense it down to one day, it looks decent!”

You can learn a lot from people. Personal development stars like Wayne Dyer or Eckhart Tolle. Or your family. Or a friend.

Or even a walking disaster like George Costanza, the iconic and miserable character from the classic TV-show “Seinfeld”. Now back on the fake reunion show that is taking place on Larry David’s “Curb Your Enthusiasm”.

Much can be learned from the great life of Costanza. Mostly what to avoid doing.

1. Believe in it. And yourself.

“Jerry, just remember: It's not a lie if you believe it.”

That quote may not be the best piece of advice in itself. But the thought is very interesting. Because the belief you have behind your words can have a huge difference. People often focus a bit too much on the words. But how are they said? With confidence? With a relaxed 100 percent conviction?

Or mumbly and a bit stumbley?

If you can’t say something with confidence then it may not matter what you say. People won’t listen. They won’t be swayed and captured by you.
OK, so how can you improve this part of your life?

One tip is being present. If you are in the moment while saying something then that tends to add a lot of weight to your words and remove incongruence and conflicting thoughts. You can find ways to become more present in your daily life here.

Also, if you think you can do something then you can. If you don’t think so then it will be very hard to do it.

So work on building that confidence in yourself. Here are three tips to get you started:

In one episode – the on called “The Opposite” – George’s life turns from a series of disappointments and disasters to a string of successes. How does he do it? By doing the exact opposite of what he has been doing all his life.

When you start studying personal development it’s a bit like that. You realise that difference between you and more successful people isn’t just that the successful ones are working harder. They are doing something else than you are doing.

Some of these things are pretty counter intuitive. Personal growth isn’t always doing the exact opposite of what you’ve done before. But it is about trying out beliefs and methods that isn’t “common sense” or doing what you may think that most people do.

It is about taking a leap of faith and sometimes keep doing things for a period of time – not just over the weekend, but for months – until you get that first success and you realise, not just on an intellectual level but an emotional too, that this stuff really works and that you can really change.

So learn what you can from people who have already done what you want to do. Take a leap of faith once in a while and try what they say even though it may sound a bit odd. Do things that feel unusual for you – while using common sense of course – to expand your comfort zone in small and big situations and to gain and understanding of things really are. Rather than getting lost in your own theories based on what you have experienced so far in life.

3. Don’t blow things out of proportion.

George really has a knack for blowing things out of proportions. A kind gesture like paying for a big salad is interpreted as an insult and as someone looking down on him.

So why do people do such things in real life too and how can you stop yourself from doing it?

One reason could be to protect oneself from pain. By actually doing things, failing and learning you also need to expose yourself to pain and discomfort. By overcomplicating things and over thinking them you can create a helpful excuse to not take action. Instead you can remain in a state where you are “still trying to figure things out” for a long time.

Another reason is to feel good about oneself in an odd way. By making things more complicated than they need to be you can make them feel very important. And since you are involved in these important things, well, then you have to be important too, right?
Now, on to decreasing these kinds of things in your own life:

4. Sometimes coffee is not coffee.

In one hilarious scene – in the episode “The Phone Message” – George and a woman is at the end of a date. It is midnight and they are sitting in his car.

Woman: Do you want come upstairs for a cup of coffee?
George: No thanks, if I drink coffee this late at night, it keeps me up.
Woman: Well, ok, good night…
George: Take it easy.

Sometimes a cup of coffee isn’t a cup of coffee. And words are only one part of communication. Being open to using common sense and experience and not just listening to words in a straightforward, logical manner can help you improve your communication skills. And prevent situations where a bad time is had by all.

5. Drop your grudges. Forgive and forget.

In the episode “The Apology” George wants an apology. A few years ago George was at a New Year’s party. He was freezing and wanted to borrow a sweater made of Cashmere wool. But the host said: “No, I don’t want to have the neck hole stretched out.” And everybody at the party laughed.

When George learns that the host is going through the 12-step program and is apologizing to the people he has wronged in the past George sees his chance. But the guy calmly and mockingly says that he doesn’t need to apologize.

And so George of course become angrier and angrier throughout the episode that ends with him screaming at a Rageoholics Anonymous-meeting.

Hilarious on TV. Pretty pointless in real life. It’s easy to get wrapped up in thinking that forgiveness is just about something you “should do”. But forgiving can in a practical way be extremely beneficial for you.

As long as you don’t forgive someone you are linked to that person. Your thoughts will return to the person who wronged you and what s/he did over and over again. The emotional link between the two of you is so strong and inflicts much suffering in you and – as a result of your inner turmoil – most often in other people around you too.

When you forgive you do not only release the other person. You set yourself free too from all of that agony.

One of the big ongoing issues about George is that he’s going bald and how it makes him feel less attractive. I think the big issue here is that George so fixated on his baldness that people pick up on it. If you are going bald or perceive something to be very negative about your appearance then it’s a problem if you think it’s a problem.

If you are ok with it, people in general will be ok with it. Or rather, they won’t think about whatever the issue might be. Your world is often a response to what you think and believe.

7. You are your own worst enemy.

George tries to manipulate women and everyone is various elaborate ways. But he never really changes. And so life never changes for him. At least not for long. Soon he is back where he started. Many episodes end with George self sabotaging a good thing by for example blowing something out of proportion. He does not feel worthy of success.

So how do you get past being your own worst enemy and become better friends with yourself? It’s not a simple thing. But to feel more worthy of success and not blow it by self sabotaging you have to live a life where you feel worthy. I don’t think there is any way around this. It’s not easy but it does work.

If you do your best, if you do what you feel deep down is the right thing over and over then when some opportunity comes along you’ll think that you are indeed a good person who has worked very hard and been through ups and downs. You feel good about yourself and you feel worthy.

Another great tip to increase self-love is to love other people more. The way you behave and think towards others seems to have a big, big effect on how you behave towards yourself and think about yourself. Judge people more and you tend to judge yourself more. Be more kind to other people and help them and you tend to be more kind and helpful to yourself.

A bit counter intuitive perhaps, but that has been my experience.

Previous post: Do You Make These 7 Common Mistakes When Changing a Habit?