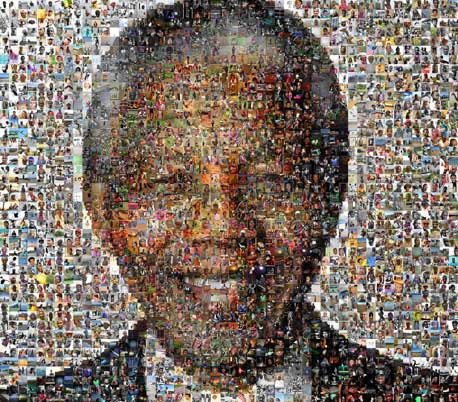 â€œIn my country we go to prison first and then become President.â€

â€œThere is nothing like returning to a place that remains unchanged to find the ways in which you yourself have altered.â€

Nobel Peace Prize winner Nelson Mandela needs no long introduction. He was a prominent activist in the struggle against the oppression in South Africa and spent 27 years in prison because of that. Finally, in 1990 he was released and went on to become a president that helped to change and unite South Africa.

Here are nine of my favourite fundamentals from Mandela for bringing about change in yourself and in your world.

1. Donâ€™t shrink yourself or your ambitions.

â€œThere is no passion to be found playing small – in settling for a life that is less than the one you are capable of living.â€

Itâ€™s tempting to play small. To just settle and take it easy. It would definitely be easier, at least in the short run. Because going after what you really want demands so much time, effort and possible pain along the way. But itâ€™s also there where you grow and can live fully.

While playing small might be easier it also comes with nagging thoughts at the back of your head that say â€œIs this all there is? Could I have done more?â€. Taking the tough road is of course harder in many ways. But it is also there you find the truly awesome triumphs and wonderful times that you may never have experienced otherwise.

2. Move towards your fear.

â€œI learned that courage was not the absence of fear, but the triumph over it. The brave man is not he who does not feel afraid, but he who conquers that fear.â€

What you really want in life is also often what you fear the most to go after. Moving towards fear is often a pretty good â€“ but terrifying â€“ piece of advice. So how can you overcome the fear that holds you back? Here are three tips:

3. Be patient and persist.

â€œAfter climbing a great hill, one only finds that there are many more hills to climb.â€

It would be nice if we got anything we wanted right now. That seldom happens. One of the key traits of successful people is that they persist and have patience where others simply have had enough and go home.

The problem is often that the time-frames we set up for success in our minds are a bit too optimistic. Advertising tells us that we will have success quickly. The idea of quick and easy success permeates society. Why? Because itâ€™s easy to sell. Itâ€™s appealing to the mind that is in itself often lazy and wants shortcuts. And itâ€™s easy to get people to buy another â€œmagic pillâ€ that they hope will solve the problem since the first product will probably leave them unsatisfied.Â

Now, Iâ€™m not saying that you sometimes can have great success quickly. But often it takes time. More time than you may have hoped for.

How can you set up realistic time-frames with possible obstacles mapped out reasonably well? Wellâ€¦

â€œEducation is the most powerful weapon which you can use to change the world.â€

By educating yourself about whatever you want to achieve or overcome you can gain a lot of power.

So read books â€“ a good tip is to check out the reviews at amazon.com before buying â€“ and blogs. Ask people who have already done what you want to how they did it. And try to help someone like someone else helped you. Itâ€™s an awesome way to gain greater understanding of what you are doing/talking about. Plus, you get to help someone out.

Educating yourself can also, like curiousness, be a great way to get rid of many of the foggy fears you may have and that are holding you back from taking action and moving towards what you want.

Turning an enemy or someone we donâ€™t like into a friend is difficult because first impressions can be powerful. Our concept of a person can remain intact if we donâ€™t push further and question and explore it.

Of course, since the ego needs to tell you that you are right and someone else is wrong then it can be hard to change your opinion of someone. That opinion of him/her is tied up in your ego and fuels your sense of being â€œrightâ€. The key and the way out here is to not take your thoughts or emotions too seriously. To stay on top of them instead of letting them overwhelm and control you.

This can allow you to open your mind to a change in the relationship.

Now, how can you make him/her your friend? One quick suggestion would be to start looking for the positive in the person. Then to take the first step and give some kind of value â€“ like help for instance â€“ to that person. And then to take more steps if s/he is not convinced that you want to change the relationship.

â€œThe greatest glory in living lies not in never falling, but in rising every time we fall.â€

â€œThere is no easy walk to freedom anywhere, and many of us will have to pass through the valley of the shadow of death again and again before we reach the mountaintop of our desires.â€

Your road to success may not be as bad as it was for Mandela and the people in South Africa. But you will probably have some bad times and some difficult and painful times. There will be bad days and bad weeks (or even months).

When you first get started with something you can be filled with enthusiasm and perfect dreams. Somewhere down the line it can become a bit messier and more uncertain.

Should you give up at such a point? Well, sometimes maybe it is time to quit and find a something new to focus on. But oftentimes itâ€™s like the world is testing you. It wonders if you really want this bad enough. Thatâ€™s when you need to push forward and not let temporary obstacles â€“ no matter if they are real or just in your mind â€“ stop you.

Failing is normal. Making mistakes is normal. The people with most success are often the people who failed the most. They learned from their mistakes and failures, grew stronger and more resilient and persisted while the rest of the people gave up.

â€œWe must use time wisely and forever realize that the time is always ripe to do right.â€

Circumstances will never be perfect. If you wait for that perfect day to finally take action, you might wind up waiting for your whole life. Some day most often never comes at all.

Donâ€™t get stuck in that all too common thought trap of thinking that you will do some special thing, but always someday in the future. The right time to take the first step and begin is pretty much always right now.

And if you donâ€™t feel like doing it and getting started, donâ€™t let that inner resistance â€“ if itâ€™s not there for some very good reason â€“ stop you. Your emotions and thoughts are not in control of you even though they may want to fool you into thinking so. You can take action despite what they are telling you.

â€œWhen the water starts boiling it is foolish to turn off the heat.â€

I think this is an aspect that is often a bit overlooked.

When you have achieved some success, what do you do? A common approach is to just lean back and enjoy your own awesomeness and what youâ€™ve accomplished. Nothing wrong with that. However, if you lean back for too long you lose your momentum. And then you have to start over again (or at least start moving again from a worse place than right after the success).

Mandela has an awesome point here. Just like you donâ€™t turn off the heat as soon as the water starts boiling you should not retreat or stop moving as soon as you see some success. Because this is the time where you can enjoy what you have accomplished but also should keep on moving and use that momentum and positive, upward spiral of action and results that you have created.

9. Understand that everyone is just human.

â€œThat was one of the things that worried me – to be raised to the position of a semi-god – because then you are no longer a human being. I wanted to be known as Mandela, a man with weaknesses, some of which are fundamental, and a man who is committed.â€

When you start to make myths out of people â€“ even though they may have produced extraordinary results â€“ you run the risk of becoming disconnected from them. You can start to feel like you could never achieve similar things that they did because they are so very different. So itâ€™s important to keep in mind that everyone is just a human being no matter who they are.

And I think itâ€™s important to remember that we are all human and prone to make mistakes. Holding people to unreasonable standards will only create more unnecessary conflicts in your world and negativity within you. Something one may want to keep in mind right now as Barack Obama begins his presidency.

Itâ€™s also important to remember this to avoid falling into the useless habit of beating yourself up over mistakes that you have made. And instead be able to see with clarity where you went wrong and what you can learn from your mistake. And then try again.

If you enjoyed this article, please share it on Stumbleupon or vote for it on Digg. Thanks a lot! =)