By Henrik Edberg Updated May 19, 2020
Categories: Lessons I have learned from…, People Skills, Personal Development 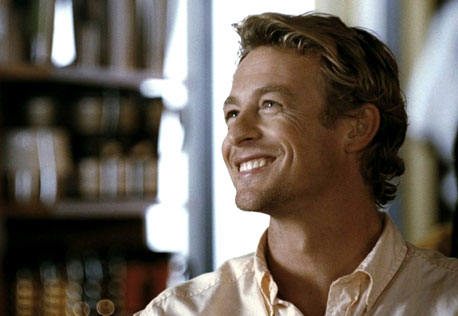 My favorite new TV-show is The Mentalist. One of my favorite little interests over the last year or so has been to try to figure out why some people stand out, why they are charismatic.

Now, if you have seen the Mentalist – a show about a former fake psychic who is really good at reading people and helps the police out with solving a weekly murder case – then you have probably seen how charismatic Simon Baker is in the lead role.

And even if you haven't, this article just draws some inspiration that show. Many of these qualities are those one may find in many other people that are often considered charismatic like George Clooney, Bill Clinton or just some friend you might have.

Find your own variation by exploring yourself. But also by experimenting and trying things you may not normally do.

Big changes do not come from just staying in your comfort zone and telling yourself “Oh, that's just not me”. Big changes pretty much always start with feeling awkward at first.

Yes, this sounds really obvious. But you have to do it too. If you actually try smiling more you'll discover how the world treats you changes a lot. People generally react to how you treat them. And emotions are contagious.

Charismatic people often seem to smile a whole lot. So does Simon Baker on the show, a 1000 watt smile like the one in photo above, probably a dozen times in each episode.

Positivity and enthusiasm are also emotional and mental headspaces that are associated with smiling and they make other people feel good. This is probably the simplest of the tips here, and the one I would start implementing first.

And, even if you don't always feel like smiling do it from time to time anyway (not all the time though of course, that's just weird).

Because it works backwards too. Try forcing yourself to smile for thirty seconds right now. By making yourself smile, no matter how you feel, your body will start to release all those wonderful chemicals that make you feel happy.

“You can make more friends in two months by becoming really interested in other people than you can in two years by trying to get other people interested in you. Which is just another way of saying that the way to make a friend is to be one.”

Now, you may think; “people aren't always that interesting”. Sure, that may be the case. But this is also a belief and you tend to see what you want to see. If you make the effort to actually be genuinely interested in people you often find interesting things.

Openness is very important here. People want someone to communicate with and listen to them without judgement. So there will be a resistance towards someone who is judgmental and people may hold back or even avoid that person if it becomes too much.

How do you become more curious?

One way is to remember how life has become more fun in the past thanks to your curiosity and to remember all the cool things it helped you discover and experience. And then to work at it.

This is one of the qualities people often mention after having met charismatic people like Bill Clinton or Oprah. They are fully there. Centered and with the intense focus that being present creates. People aren't used to that and feel special.

So listen fully to the person as an equal no matter who it is. Keep the eye-contact without staring (and don't forget to break it sometimes).

Also, presence tends to make you more open and curious in a natural way. When you are present things and people just tend to become more interesting.

Here are two quick ways to center yourself and reconnect with the present moment again:

This is a very important point and something I think is perhaps often missed by people who want to improve their social lives.

They may think “well, I have been so nice towards everyone for the last few months but it doesn't seem to have changed their behavior towards me much”.

This is the “nice guy/girl” problem. S/he is very nice but there is no assertiveness.

There is no changed feeling within about how you feel you deserve to be treated. You may still be nice just to get approval from other people. You feel the craving need. And people who crave approval the most tend to get it the least.

Charismatic people are often seen as leaders of some sort.

Simon Baker is assertive in a relaxed way on the show. Although he isn't the boss officially he often gets to do things his way. And although that's just a TV-show, I think it works a bit like that in real life too. You have to be a leader in some way, but it doesn't have to be in an official way.

Like smiling, this one is pretty obvious too. You can't really be that charismatic if you aren't confident.

Also, it's only when you face your fears that you discover the thing that billions of people throughout history have discovered before you. Failure or making a mistake won't kill you. Nor will being wrong. The sky will not fall down. That's just what people that haven't faced their fear yet think.

But facing your fear isn't always easy though. Here are two tips to make it easier:

This may sound like an odd tip but I have seen charismatic people do it quite a bit.

Baker does it a lot on the show, he is constantly amused by what happens as the plot twists and turns. You can also see on DVD:s with Eckhart Tolle, a third of his seminars seems to be about him being amused by something and laughing. George Clooney does this a lot too in interviews and movies.

How do you do it? By not taking everything so seriously. By keeping a light and positive attitude. By having an abundance mentality.

On the show Baker really don't care too much about what people think of him. He just does what he wants. Of course, in reality you have to be a bit more careful.

But when you are overly concerned about what other people may think then you often act in reaction to what you think they might say or do. And so you can't be your most genuine and best self.

So being more charismatic is mostly about bringing out more of these or other positive qualities in yourself. They are already there to some extent. You just have to practice and have the courage to make them stronger and bring them out more consistently.

Previous post: 7 Timeless Thoughts on Taking Responsibility for Your Life