What Bruce Springsteen Can Teach You about Life

â€œFor the ones who had a notion, a notion deep inside
That it ainÂ´t no sin to be glad youâ€™re alive.â€

A couple of days ago you could pick up Magic, the new album from Bruce Springsteen in your local record store.

I havenâ€™t listened to Bruce that much these last few years, but I used to be really into his music.

I even saw him when he played in Gothenburg in 2003. It was pretty awesome.

In retrospect I think that some of the things that attracted me to Springsteen are the same things that got me interested in personal development. While a lot of the other music that I listened to at the time was kinda negative and whiny Bruce radiated positive energy and thoughts. It wasnÂ´t depressing but it was also not optimistic in a cheesy way.

There was an incredible enthusiasm in the music and often a thought about how there is something more to life than just sitting around or trapping yourself in a boring and depressing rut.

And while sitting here, looking back and listening to the wonderful â€œYour own worst enemyâ€ on repeat I thought about a few of the things IÂ´ve learned from Bruce Springsteen. 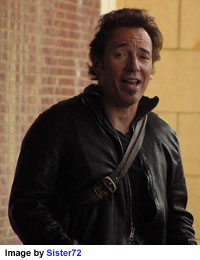 Itâ€™s tempting to believe that talent is just about everything. But of course we mostly just get to see really successful people at their big, crowning moments.

We donâ€™t get a feel for, or seldom even a picture of or text about, all the time and energy they have put into creating and practising and refining a song in some dingy basement. Or the hours and years that have been spent hunched over a keyboard or a golf club.

Now Iâ€™m not saying that talent doesnâ€™t play a part. But when I think about what Iâ€™ve read in biographies about Springsteen Iâ€™m reminded about how anyone who is really good at anything didnâ€™t get there without lots and lots of work. Probably more work than some of the people that didnâ€™t get so far. So maybe it isnâ€™t always the talent that decides who is going to be really successful and who is not?

Give it all you gotâ€¦

Itâ€™s really fun to see how much someone can give. Seeing someone just giving it all over and over, seeing how energetic and creative they can be, for so many years is really quite inspiring. Seeing Bruce Springsteen on stage is a good reminder that most of us probably have a whole lot more to give, a whole lot more potential hidden somewhere within.

…Even if you only have few fans.

Itâ€™s a bit easier to give it what you got when everyone is cheering you on. But you may not get the great response youÂ´d like immediately.

I remember an anecdote from one of the biographies about Bruce when he and the E-Street Band is out on tour in the late 1970Â´s. In one town they discover that there are only something like 9 people and a dog at the concert. So do they try to sneak out early?

I think Bruce says something about the audience having paid for the tickets with their hard-earned money just like everyone else. And then Bruce and the band plays for 4 hours. Thatâ€™s not just a great and giving attitude. I also think that there is a joy and validation that comes from within that made Bruce and the band go about business as usual and give a great performance.

And I think this mindset is one of the things that propelled them towards a bigger breakthrough and larger audiences.

Itâ€™s easy to get stuck in a reactive frame of mind where you need the outside validation to keep going.

One way to not do that is to choose to do something you really like. Then your motivation will come from the inside rather than the reaction of others. This is for instance important if youâ€™re a new blogger. Choosing the right topic to blog about can carry you through the first few months and help you write some really good stuff even though it might seem like only 9 people and a dog are reading your posts.

There are a whole lot of bold lines and emotions in Bruceâ€™s music. And I think there is something to be said about boldness in any communication between people. When you keep at a normal tone you can get normal or sometimes little attention.

But when you go bold you start something bigger. You hook your listeners not just to your words, but you suck them into your world. You arouse all these different kinds of emotions in them. You create a stronger experience and a powerful connection. Being bold can of course be scary, but there are payoffs too.

This is something that sometimes gets lost in the mix. But one of the biggest lessons I have learned from Bruce is to relax and have fun. When you watch him and the E-Street Band on stage you realise how much fun they are having while creating and performing. And I think this is an important point too: together they create their own fun from the music. They donâ€™t wait around for someone or something else to bring the fun and excitement. They produce it from within.

And that fun they create doesnâ€™t stop within the group. The emotions, the energy from one person travels outward and onward to the next person. So enthusiasm is contagious. And so is optimism. And anger, boredom and apathy too.

I think one of the biggest keys to BruceÂ´s success is how he is able to convey his own emotions through your speakers (or on stage) and make you feel a lot too. As I said above in point #4, when you go bold with your emotions you create a strong connection to other people. So going bold in a positive emotional way is a good tip for creating a real connection and perhaps starting a good relationship.

You are the one holding yourself back.

As Iâ€™m listening to â€œYour own worst enemyâ€ over and over again Iâ€™m reminded about one of the most important things Iâ€™ve learned over the last year. Most of the time itÂ´s not someone else holding you back. Itâ€™s you.

If you go beyond the surface of a problem you often discover that what seemed like an external problem actually has a solution within you, within your thoughts and behaviour. And not saying this in a rah-rah motivational way. Itâ€™s just what I have discovered to be accurate a lot of the time.

If you like this article, please give it a thumb up