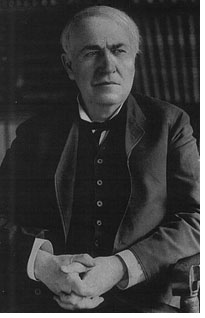 Thomas Alva Edison was one of the most famous and hard-working inventors in history. When he died in 1931 he held 1093 patents in his name (though a lot of his inventions were collaborations).

Some of his most used inventions are of course the light bulb and the gramophone.

He also did quite a bit work to improve x-ray machines for while (until he almost lost his own eye-sight and an assistant died due to radiation poisoning). And he had a AC/DC-current war with the odd and fascinating inventor Nikola Tesla.

Here are a few of my favourite tips from Edison. They are all about success. And what kind of work and mindset achieving such a thing may require.

â€œMany of life's failures are people who did not realize how close they were to success when they gave up.â€

One of the problems in life is that people just give up too soon. I think quite a big bit of this because of social programming and the expectations set by society. Itâ€™s seen as pretty normal to try once or maybe a few times and then give up.

There is also a ton of products, books and commercials that promises us that we can â€œEarn 20000 dollars in just 4 weeksâ€ or â€œEasily lose 30 pounds in 30 days!â€.

And we hear these messages over and over throughout life.

No wonder itâ€™s easy to fall into the trap of believing that everything should work out after about three tries or so.

When the promise of a quick fix is sold to us all the time and people around us are buying into it then it becomes easy just do the same thing. And align our expectations of the world around how things â€œshouldâ€ work rather than how they work.

If one does not give up so quickly but tries perhaps 20-30 times or more there is a pretty good chance that success will come. If one keeps at it for not 3 weeks but 6 months then the likelihood of success often increases.

If not, then you may spend a lot of time in a cycle where you try a new quick fix, get discouraged quickly and give up, spend some cash on the next quick fix and getting overly enthusiastic and then continue the cycle by jumping from one magic bullet to another, never achieving much of a result. You can read more about this problem in One Big Mistake a Lot of People Make.

Now, how do you reframe failure? How do you look at it so you donâ€™t feel overwhelmed and give up? Well, you can look at failure as a part of a process. You look at it as ways that wonâ€™t work. You draw lessons from those ways. Then you let that go, focus on the present and try again (this time perhaps in a different way).

If you look at failure as something big, like itâ€™s the end of the world youâ€™ll probably be quite a bit afraid of it. And so it can feel too painful to go on after a few failures. Or you may never even try, since your mind is projecting all these horrible and painful future scenarios of what will happen if you try and fail.

Also, if you come from a place of abundance then failure has less power over you. Failure can be really useful if you learn to redefine it for yourself. The key is to develop an abundance mentality â€“ where there is always an abundance of opportunities â€“ instead of a more common scarcity mentality where there is always a lack. If you start to think about your world this way failure becomes less painful and the fear of missteps lessens.

Because with an abundance mentality you believe that there are more good opportunities out there even if you experience failure. So you are less inclined to give into fear and to pull away from taking a chance.

Failure still hurts even if you think about things this way. But then you think about what you can learn from the failure. And then you start over again. And in retrospect you often discover that your previous failure provided some very useful, perhaps even necessary lessons, for your latest project to grow as well as it does.

This way â€“ seeing it as a process and have an abundance-mentality â€“ is one way to reframe failure to keep yourself from giving up. If you look at it this way youâ€™ll be less prone to lie down and just give up.

â€œThe value of an idea lies in the using of it.â€

Useful information is good. But you have to put it to use sometime or youâ€™ll never reap any benefits or success. This is a pretty common problem when you for instance get interested in personal development. You get a lot of books, programs etc. and you study them. And then you get more.

Always looking for the magic bullet that will give you success without you having to do anything. Confusing yourself and feeling like you are making progress by reading another book.

That emotional high is dangerous because it can fool you into thinking that things are progressing.

But then a few months later nothing much has happened, except you have a lot of knowledge (and have probably forgotten half of it because your mind couldnâ€™t retain it because you werenâ€™t putting it into action). To get results you need to take action. Thatâ€™s also the best way to really understand the information you have absorbed and possibly find ways to tweak and use it in an even better way for yourself.

â€œBeing busy does not always mean real work. The object of all work is production or accomplishment and to either of these ends there must be forethought, system, planning, intelligence, and honest purpose, as well as perspiration. Seeming to do is not doing.â€

But just going for it, taking action and doing something isnâ€™t enough. You have to ask yourself if what you are doing is useful? Or is it just another way to keep yourself busy, to keep yourself from doing what you really want to do?

You need to think about what you really want to do. You need to make plans. Then throughout your normal day you can remind yourself, by for instance using external reminders like written notes, to stay on track. To not get lost on the wrong track or in the busywork that is perhaps a normal routine or an easy escape from the things you'd like to do but that require more perspiration.

There is a myth that geniuses mostly just are geniuses and can do great things pretty much as easily as you and I tie our shoelaces. But what is seldom mentioned or seen is how much the really successful people work. And how far the people that just practise, practise, practise can go.

I think natural talent certainly plays a role. But I also think that it can become an excuse to slack off and never come close to your potential. To find something you can become really, really good at â€“ perhaps even be regarded as genius at â€“ I think you need to find something you really, really like to do. Otherwise, your inner motivation and passion will run out and youâ€™ll probably show up less and less. Until you one day just give it up.

Maybe it wasn't the thing for you. Maybe you grew apart from it.

And if that happens then you can try to find another thing that you really, really like to do.