Do You Make These 7 Mistakes When Trying to Keep Your New Year’s Resolution? 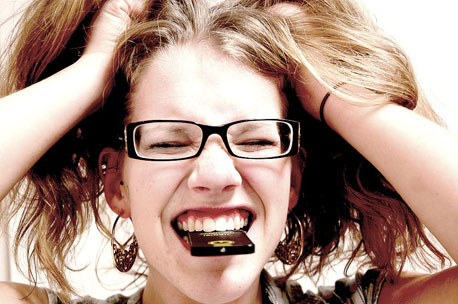 â€Yesterday, everybody smoked his last cigar, took his last drink and swore his last oath.Â  Today, we are a pious and exemplary community.Â  Thirty days from now, we shall have cast our reformation to the winds and gone to cutting our ancient shortcomings considerably shorter than ever.â€
Mark Twain

Mark Twain was right about the problem with the New Yearâ€™s Resolutions. Most of them are forgotten or abandoned and then we are on the old trampled and familiar paths a month later. But how can we avoid it and actually make lasting changes in 2009?

Here are seven common mistakes when trying to keep New Yearâ€™s resolutions. And some thoughts on how you can solve each of those problems.

1. You donâ€™t really want it that much.

Itâ€™s easy to tipsily declare your New Yearâ€™s resolution for 2009 when you got a glass of champagne in your hand. But do actually want it?

Maybe you donâ€™t really want it that much. But the world around seems to want it. This doesnâ€™t mean that you canâ€™t achieve it. But it might be better to focus on what YOU really want. Both to steer your life in the direction you yourself want and to create positive internal motivation instead of external pressure you feel you should live up to.

This doesnâ€™t mean that you canâ€™t use â€œlooking good at the beachâ€ as one motivation to get in shape. But do it because you want to look good. Not mainly because you want other people to validate you.

When you have figured out what you really want take out a pen and piece of paper. Write down all the reasons why you want to achieve this.

You can use this paper later on to solve some the other problems that may pop up.

2. You confuse homeostasis with “time to give up”.

One problem with sticking with your resolution is homeostasis. What that means is that any system wants to be stable. That goes for you. And for the people around you.

So after the initial enthusiasm wanes it may not feel as that much fun anymore. It's sort of enthusiasm backlash. This is the homeostasis kicking in within your mind (no matter if the goal/habit etc. is actually very positive for you). Itâ€™s a resistance to change to keep the system (you) stable. If you are simply aware of this being what it is – rather than a signal to give up – you can persevere, be patient and keep going more easily.

3. You donâ€™t know how to handle your bad days.

We all have bad days, days when we donâ€™t feel like doing anything about our resolutions. Thatâ€™s normal.

But it can be dangerous to just go with how you feel and think on those days. It can lead to more days with nothing getting done. So you have to help yourself to keep moving on those days too to be consistent and stick with establishing your new habit. You can do this in a couple of ways.

4. You're not changing your environment to suit you.

I think this is an important and sometimes overlooked point. To be able to change you may have to change parts of your daily environment to better support you when establishing your new habit.

5. You donâ€™t have a realistic plan and expectations.

Itâ€™s easy to get caught up in the enthusiasm and think your resolution will be taken care of within a few weeks. In reality, however, things tend to take longer than we may have hoped for. Especially if you havenâ€™t done anything similar before and lack actual experience to draw understanding from.

To make a realistic plan you need to educate yourself. Not just draw up some random plan. Have a look at some well respected books Â­- for instance by checking the Amazon rating/reviews for them – and websites on the topic youâ€™re interested in. Talk and listen to people who have actually done what you want to do.

I would also recommend focusing on making the activity the goal, not the result. If you focus on losing 20 pound and misjudge the time and effort it will take to do that then itâ€™s very easy to become disheartened and give up.

So focus on the process, focus on – for instance – working out 3 times a week instead. Make that your habit and adjust the difficulty along the way. You should still have your goal of losing those pounds in your mind and measure from time to time. But keep your main focus on just going to the gym or running track consistently, week in and week out. The pounds will come off as a side effect of that habit.

With a realistic plan where you focus on consistent action it become easier to be more patient. And also not to give up when you are faced with homeostasis or the inevitable mistakes and temporary failures along the way.

6. Youâ€™re focusing on too many resolutions at once.

If you have too many goals, to many habits to implement directly at the start of 2009 it may wind up in little being established as a natural part of your life two months later.

Enthusiasm is great. But it can make you so unfocused that you just bounce around like Tigger. Or drain you after a while as you try to create too many new habits at once. Especially if you are not used to it. Or in great shape energy wise (keep an eye on what you eat, how much you sleep and the exercise you get).

It may be better to just focus on your most important habit/resolution for January. It will be less of a drain on energy and focus. And you still have 11 more months to establish other habits you want to incorporate into your life.

This may sound like a slow and boring way of going about things. But itâ€™s whole lot better â€“ and more effective â€“ than becoming fatigued, feeling down on yourself for not being able to keep up with all your resolutions and finally giving up completely.

7. You let temporary failure or mistakes lead to giving up completely.

I failed and gave up three or four times before I could establish a habit of working out three times a week. I think read that Steve Pavlina failed four times before he was able to switch to a raw diet and finally stick to it. And Edison failed several thousands of times before he got the light bulb to work as he wanted.

So you got to understand that failure is normal. And the best route is to keep going and gain understanding from your failures or mistakes. Social conditioning and homeostasis often seems to lead us to believe that if you fail you should go home and not ever try again.

But the most successful people are so successful just because they failed, learned and tried again. And again. Because they viewed failure and mistakes as something valuable and pretty positive instead of something dreadful and painful.

2009 will pass no matter what you do. You will arrive at New Yearâ€™s Eve this year too.

So if your fail or make some mistakes, so what? Since the time will pass no matter what you do you might as well try again. By doing that you can make 2009 your best year ever.

If you enjoyed this article, please share it on Stumbleupon or vote for it on Digg. Thanks a lot! =)