3 Good Reasons to Stop Thinking So Much, And How to Do It 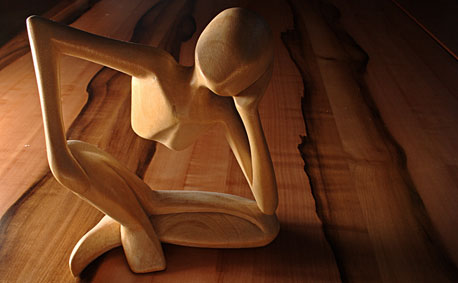 What is stopping people from getting the results they want?

Well, for one I'd say a pretty common and self-imposed roadblock is thinking too much.

In fact, one of the best tips for getting things done that I have learned so far is simply to stop thinking and start doing.

I think this problem of overthinking things is nothing that I'm alone with in the personal development community. I think it may be one of the problems that draw people to books and websites on self-help and one of the things that still keep them from achieving what they want even after they have picked up on a lot of helpful advice.

Because after having read five books you think and plan and think a little more. You get lost in thinking. At least that's what I did. If you're an overthinker then getting your hands on personal development information becomes just another way to creatively procrastinate. But now you can label it as making progress and get an emotional kick out of it.

Now, I'm not saying that educating yourself or thinking is something bad. But overdoing it won't help you either.

Here are a couple of good reasons why.

I sometimes think there is some kind of wish when overthinking that thinking will somehow replace action. A wish that if you just think enough you can find some easy way out or get what you want without having to actually do something.

Without taking action you'll most likely not get what you want. Thinking is however seldom as scary or uncertain as taking the leap into the unknown and taking action.

So it can become a place where you hide from taking action and then rationalize to yourself in different ways how all this thinking will help you. Even though you know deep down that what you really want and need is to take action and get going.

2. You may overcomplicate things.

Are things hard and difficult? Yeah, they might be. But you may also want consider that it's you that are making them even harder.

By overthinking things you make them more and more complicated in your mind. You can turn something fairly simple into a really complicated and big mess. And so it goes from something you can do with some discomfort and persistence into an epic battle where you keep moving inch by painstaking inch.

A problem here is that when what you are doing is difficult and complicated then you and others think that it must be important. And so you feel important. You derive a sense of importance from making things into big struggles.

Such a thing can form into an identity where you are struggling and keeping on moving forward while you imagine other people lying at home in the sofa lazily watching some TV. It can strengthen you. It can make you feel negatively about other people. It may feel good in a sort of way to feel like an outsider or some kind of misunderstood underdog that's up against so much. So it has its upsides.

However, you may also want to consider not making things to so hard for yourself. You don't have to be a rebel that's going against the world. You can just accept what you choose to do. And that other people choose to do other things.

Upsides such as a feeling of importance or of being the underdog may make it hard to give up the notion that what you are doing may not be that difficult and complicated. But I have found that when I do that then I become more relaxed and things tend to be easier to accomplish.

You can to some degree control how difficult something will be. Much of your struggle is up there in your head. Just try letting go of the notion of how awfully difficult something is and see what happens. You may be relieved. And surprised at how you have been making your life more complicated than it needs to be.

If you overthink things you may overcomplicate them. And so you become nervous and start to second guess yourself all the time. It also becomes harder to focus on doing something when you have a have a habit of thinking a lot. You may often slip into possible future scenarios in your mind instead just focusing on what you are doing right now.

All of this can cripple your performance and produce results that are worse than they could have been.

How to stop thinking so much

So, I used to be a big overthinker. Still am. From time to time. But I have made progress. Here are three things I use to cultivate a habit of not overthinking things.

Be aware of the problem.

The most important thing is to be aware that you tend to overthink. And to keep being aware of that in your everyday life. You can for instance do that with post-it notes that say “Don't overthink things. Act!” or something along those lines.

By just being aware of your habit you can often pick up on when you are doing it, stop yourself and do something more helpful instead. Over time it also becomes easier to step out of the loop of thoughts and not get stuck back in it a half an hour later.

Instead of thinking about something for days, tell yourself that you have – for example – 30 minutes to think. Then you will make a decision.

Focus on what's in front of you instead of flying off to the past or Tomorrowland for long periods of time. A tennis player will for instance not think much while playing. She just trusts in her own subconscious and stays with flow. Her body will – after years of practise – know what to do automatically.

The same goes for many things in everyday life. You don't have to think a lot about everything. You can just stay present and let the right actions naturally arise.

This may sound a bit wonky, but if you just do things while being present you may discover that the results are often better than if you put in a lot of thought.

Like the tennis player, you know what the right thing to do is and how to do it well from years of experience and practice. You just have to let go of all that thinking that can cripple you. And have trust in your capabilities.

For tips on how to be present have a look at 8 Ways to Return to the Present Moment.